How to Reverse Sear on a Smoker 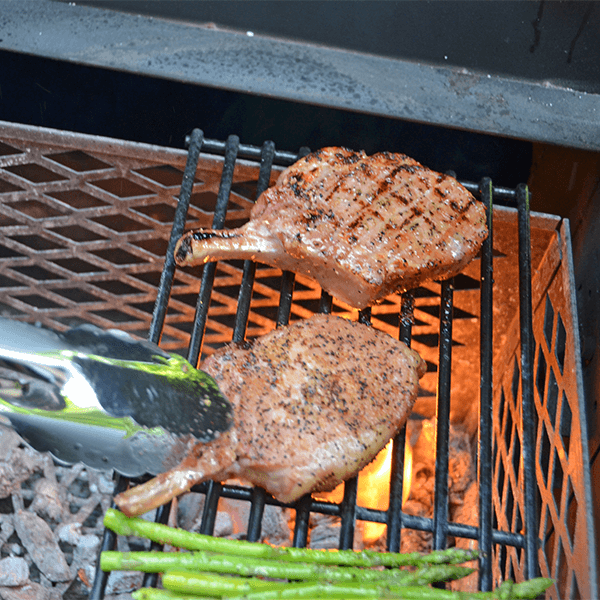 Reverse searing is one of the most effective techniques for cooking thick steaks and other large cuts of meat. No more difficult than grilling a steak; it just takes a little more time. Rather than searing the meat first, the reverse-sear technique begins by slow-cooking until almost done, giving the meat time to absorb that wood-fired flavor. Then it’s finished with a high-heat sear for a caramelized outside crust. Use this method on thick cuts like London Broil for more tender, juicy and flavorful meats.

About the technique: In the 1970s, Dr. Bruno Goussault, Chef Georges Pralus and Chef Jean Banchet were cooking meats using the sous vide method, finishing their meats with a quick sear on a hot pan or grill. In 2001, Chris Finney, a member of the Iron Pig BBQ competition team, introduced the reverse-searing technique or “The Finney Method” to the barbecue world.

How long does it take to reverse sear a steak?

The short answer is 62 to 64 minutes. It takes approximately 1 hour to smoke steaks. Once the internal temperature reaches doneness temperature, then it’s just 1 to 2 minutes per side to sear them.

HOT TIP:  Insert a temperature probe to alert you when your target temperature is reached or start checking the internal temperature after 45 minutes using a meat thermometer.

Reverse-searing may take a little longer, but once you learn how to reverse sear on a smoker, you’ll find it has many advantages.

Doneness: Smoking meat low and slow before searing cooks it more evenly, creating a consistent degree of doneness throughout the cut.

Tenderness: Warming the meat slowly allows natural enzymes to tenderize the meat over a longer period of time.

Juiciness: Searing over high heat at the end of the cook allows the muscle fibers to retain more water content, making the meat juicier.

Smokiness: Smoking before searing allows the smoke flavor to be infused into the meat before the outside is caramelized.

Happiness: Since the meat is rested after smoking and before searing, you can enjoy it hot off the smoker.

Should you sear steak before or after smoking?

Whether you sear steak before or after smoking it really depends on your personal preference. If you’ve never tried reverse searing, we highly recommend the technique. The reverse-sear method uses low heat to bring the internal temperature up to about 122°F before finishing with a high-heat sear for a browned, sizzling crust and irresistible meaty taste and aroma from the Maillard reaction.

Can you reverse sear steak in a smoker?

Yes. All you need is a smoker and a high-heat source for the final sear. The high-heat source varies depending on the type of smoker, as listed below for reference when reverse-searing on an offset smoker, drum smoker or pellet grill.

Can you reverse sear on an offset smoker?

Absolutely. If you’re cooking with an offset smoker, after smoking the meat in the cooking chamber, you can sear it in the firebox over hot coals or wood.

How do you reverse sear on a drum smoker?

How is reverse searing done on a pellet grill?

Pellet grills make reverse searing almost too easy. Set the cooking temperature to 200°F. Insert the temperature probe and cook until your target temperature is reached. Increase grill temperature to HIGH and place the meat on the center grate for the finishing sear.

Cook time varies greatly when smoking steaks depending on the cut and thickness of the steak, the consistency of your smoker’s temperature and your desired doneness. A good rule of thumb is 1 hour for every 1 1/2 pounds of meat.

At what temp do you reverse sear?

1. Smoke your meat between 200° and 250°F until the internal temperature reaches about 10 to 15 degrees less than your desired doneness temperature.

2. Remove meat from heat and rest until the internal temperate rises to its maximum off-grill temperature and begins to fall.

HOT TIP:  Giving your meat the time it needs to rest allows juices to redistribute, retaining moisture for tender meat. The internal temperature will continue to rise 10 to 15 degrees until it levels out and then begins to fall.

3. Sear the meat over the hottest heat, about 500°F for 1 to 2 minutes per side to add a smoky, caramelized crust

The difference between reverse-seared meat and searing at the beginning is that the degree of doneness is consistent from the center almost to the edge. If you’re not careful, the traditional searing method can result in a thick ring of well-done meat on the outside and a rare bulls-eye in the center.

Up Your Game: Tips & Tricks from the Pros